Please feel free to comment on anything posted on this blog. But please remember to identify yourself when you do, so I can reply and keep track of who's been following the blog.
Many thanks.
- R.

An Introduction to Fungi 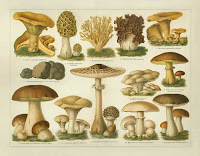 I have just completed a mushroom inoculation course and am now trying my hand at growing mushrooms. On this course, ran by the British Trust for Conservation Volunteers (BTCV), we learnt about the three main groups of fungi.
The way a mushroom grows is very interesting. The first thing to note is that mushrooms are the fruiting body of a fungi, mush like an apple is the fruit of an apple tree which holds the seeds of the plant which will later be dispersed and form new trees. Fungi grow from tread like branching structures called Hypha that are not normally visible as they grow underground or under the surface of the material the fungus is growing on. This mass of Hypha is called the Mycelium or sometimes is referred to as Shiro. Underneath large forest the mycelium can spread vast distances gathering nutrients from nutrient rich areas and delivering them to nutrient deprived areas. Fungi have no green pigment and are therefore incapable of photosynthesising instead they derive organic material from other organisms such as soil, tress, etc.

There are many different mycelium which will produce fruiting bodies (mushrooms) some are edible and some not so nice and others are poisonous to us humans. We decided to go for the Pleurotus Ostreatus variety common name Oyster mushrooms. Most fungi are easy to grow while others require very specific environments to thrive. Growing mushrooms  for eating normally requires acquiring some mushroom spawn. Mushroom spawns are the first growth of a fungi, they are the mycelium growth which envelops a material and begins to feed on the nutrients present in that material, spread and eventually producing fruiting bodies. Mushroom spawn are sold in the form of grain or dowels which have been colonised by the fungi required.

Mushroom Logs - This is the process whereby logs are cut and collected from living or recently dead trees and inoculated with the spawn of the mushroom you want to grow. Holes are made at along the log (evenly spaced) and the spawns are added, the holes are then sealed using wax. Wax is used to help reduce other forms of fungi entering the holes. The logs used would mainly be determined by the amount of spawn you have, the type of mushrooms you want to grow. The larger the log the longer it will take for the mycelium to colonise. Fungi will normally only start fruiting when most of the nutrients in the material it is growing in is used up. Some fungi grow better on softwoods, other do best on hardwoods. The variety of mushrooms you want to grow will determine the type of wood you will use. For a standard piece of wood (3ft long and 4inch in diameter) the time between inoculation and fruiting can be anyway between 6 and 18 months. It is important to note that fresh logs i.e. logs taken from live trees, should not be inoculated until at least three weeks after cutting but no longer than three months after cutting. The time between cutting the log and inoculation allows the naturally released anti-fungal (wound compounds) terpenes and (poly) phenols to degrade so that they do not inhibit the colonisation of the log by the  mushroom mycelium. After three months other fungi will have already began colonizing the log and would therefore compete with the mushrooms you would like to grow. 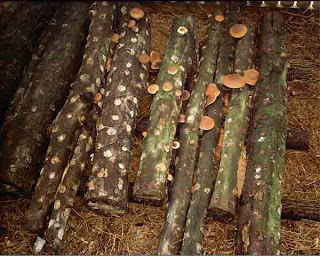 Mushroom Logs
Fungi Substrates - Substrates are mediums used to grown mycelium. Each fungi grows differently in different substrates. Straw, wood chips, soil, leaves, compost and mulch are all types of substrates that can be used to grow mushrooms. Oyster mushrooms grow particularly well in a wood chip, straw/soil mix. This way of growing mushrooms yields a quicker return than the log inoculation process but has a shorter fruiting period.
Here at the May Project Garden site we decided to go for the second method of mushroom growing. The space we selected for growing the mushrooms was a space between a brick structure and the polytunnel. This space is not too exposed to direct sunlight and remains quite damp during the day. We first cleared the site, removing all bramble, thistle and other stubborn weeds, then laid down a layer of weed suppressing fabric. The reason we first laid the weed suppressing fabric was to stop weeds form growing in our substrate and to limit other fungi from finding there way into the substrate via the ground. 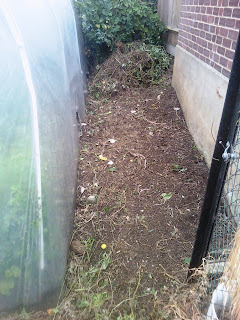 Cleared site
We then put down a layer of straw and then added some bark chip and mixed well. Once we were satisfied  with the proportions of straw and bark chip we saturated the mix with hot water in an attempt to kill off all existing fungi. 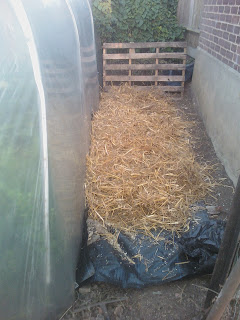 Straw and Bark chip Substrate
Once cooled the grain spawns were even incorporated into the mix and covered with a very light permeable fabric. This covering will hopefully give the mycelium we wish to grow a chance to colonise the substrate by making it difficult for other spores floating around to get in, it also acts as moisture retaining barrier. 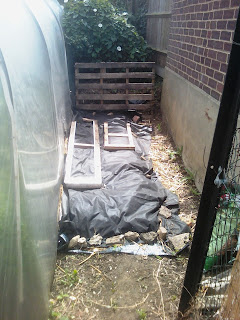 The completed Mushroom Bed
The main bit of maintenance for this system is to make sure it remains moist at all times, especially during the warmer days. The experts say it would normally take on average 4-6 month before a 2 metre square area is completely colonised and ready for fruiting. So now we wait.
Posted by EarthMan at 11:25